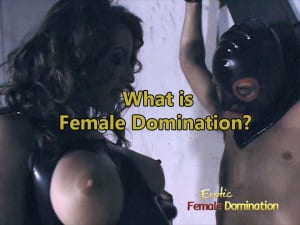 The traditional ‘role’ in a relationship is that the man holds all the power. He does absolutely everything to for the woman. It is somewhat of a ‘power play’. Female domination aims to flip that on its head, and I am sure that there are both men and women which enjoy this rather wonderful fetish.

So, let’s shoot back on the history of female domination. It can be traced all the way back to ancient Mesopotamia. I am sure you are a bit horny and looking for some amazing female domination videos, so I am not going to bore you with too much history here. However, the first record that we have of this fetish comes from this era and the Goddess Inanna.  Various poems and other texts were written where people submitted themselves to the power of her. Rituals were fraught with pain in a bid to get this Goddess to give them pleasure. This tied into cross-dressing somewhat, which is likely to have originated through the same Goddess, but that is a story for another day!

Obviously, a lot of it has been underground for much of this time because, traditionally, the man was not supposed to let themselves be controlled by a woman. Yep. Sex was completely different back then. However, this is how fetishes are born. Something that you are not supposed to like becomes a kink. It then overtakes your life and you need it so badly. This is probably why female domination is so popular now.

Nowadays, when people think of female domination, they think of men who are tied up, whipped, and just controlled. This is the type of domination that you can expect to see in a brothel or something like that, albeit it is probably going to be very underground as the number of people who enjoy this type of thing ‘in real life’ is going to be minimal but, as you are going to discover throughout this website, female domination covers so much more than this. Hell, you have probably watched female domination porn videos in the past without actually realizing that you were watching them!

What is female domination?

This is one of the reasons as to why female domination porn is so popular as a kink. Hell, I think absolutely everything should be able to find something that they can enjoy with female domination if they put their mind to it. While female domination normally seems like it is going to be the hardcore stuff with whips, chains, and all sorts of pain, it does not have to be. All it means is that the woman is taking control of the situation. This could be absolutely anything. It could be as simple as a man being blindfolded and then pinned to the bed while the woman has her wicked way with him. Simple stuff like this is amazing and I am positive that it can get just about every man going.

Not Just For Men! 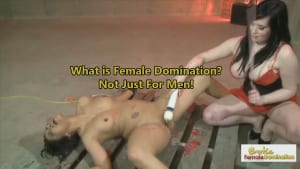 What you must remember is that when most people think about female domination, they think about dominatrix. Photos like this are incredibly rife online. For example; you are likely to find plenty of photos with women dressed up in leather gear and the like. They may not even be naked, but there is just something about the way in which the catsuit hugs their body which is just so incredibly perfect. It is something that I personally enjoy. You also feel like you are being dominated by the woman in the photo, even if they are not moving, because you just want to rip off their catsuit and have your way with them.