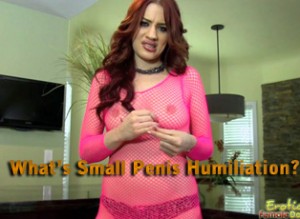 A male that likes to watch small penis humiliation videos does not necessarily have to have a small penis: naturally, half of the population is under average, but this does not mean that all of them are deemed to have a ‘small’ penis. In fact, owing to the fact that regular pornography generally calls upon the male stars to have incredibly large penises in order to perform, many males get the wrong idea about the natural size of a penis and believe that they are unable to provide sufficient levels of satisfaction to a lover because they cannot replicate the same level of girth or length that a pornstar can.

Here is a short story relating to small penis humiliation:

Oh my god! Just look at how pathetic and tiny that cock is of yours. You must be a virgin, right? I can’t imagine what it would take for a woman to want to engage with something as small as that. I mean, it’s so insignificant! I think calling yourself a man is a little bit of a stretch. Now, while I have no intention whatsoever of having that anywhere near me, I guess I can give you some jerkoff instruction so that you can at least get some pleasure from that small penis of yours.