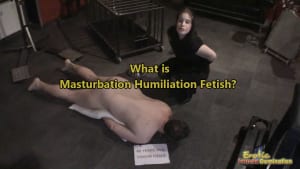 This can also be part of a Mistress’ scheme to make a submissive completely obsessed with her. She could order a slave to masturbate to her often, making him associate all of his sexual thoughts with her. Naturally, this could also lead to something like the previous ideas, with her making fun of him for the very act of stroking his cock or teasing him because he would never stand a chance with her. Whatever her technique, part of her goal would be to humiliate the slave for being so hopelessly addicted to her and knowing that all the teasing and mocking in the world won’t stop him from feeding his new addiction. In fact, the deeper he goes, the meaner she can get because he’ll find himself craving anything she has to offer even if it’s simply more humiliation.