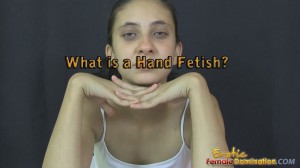 Hand fetishes are experienced in people that have a particular attraction toward of sexual fascination with hands. There is no word used to describe hand fetishism as a form of partialism (such as podophilia for feet or nasophilia for the nose), although one might suggest that handophilia would be a convenient way of describing the phenomenon. Nonetheless, it is a relatively common fetishization within the partialism community and one that has many websites, blogs and communities devoted to its exploration. Hand fetishists will often consider many different aspects of the hands to be attractive, with many having different ideas of what the most attractive pair are.

Hand fetishes can exist for both men and women and toward male and female hands, with some slight variation between the two in common desires. For instance, women will often suggest that they enjoy the hands of men that work with them physically. Callouses and scars are considered to be highly attractive traits for women who have a male hand fetish; likely owing to the classic concept of masculinity. It should be noted that a vast majority of hand fetishists are men who are attracted to female hands. In those scenarios, classically feminine traits – such as slender, well-maintained hands, are desirable. A soft touch, pink fingernails and a lack of scars or discoloration are considered particularly attractive.

Hand fetishists can experience a fetish engagement with hands via a number of mediums, with a slit between passive and active being the easiest to understand. An example of a passive appreciation of hands includes looking at women that are using their hands for particular activities, such as eating or doing dishes. An example of an active fetishism of hands would perhaps be visiting a beauty salon in order to get a manicure done. Men with hand fetishes may also find massages – particularly of their face and their hands – to be incredibly arousing. It should be noted that the partialism is not specifically required to be doing anything sexual, although this might also be enjoyable for individuals that have a hand fetish.

Explanations for hand fetishes are usually made and implied via an experience at an earlier point in life. Being attracted to a girl that used to touch you a lot, or otherwise had some suggestive focus on her hands, can often be a reason for the fetish. This applies across all forms of partialism, although there is some evidence to suggest that foot fetishism has a deeper explanation in the cross-firing of pleasure signals in the somatosensory cortex.