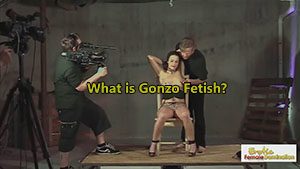 Gonzo fetish and the filming style really started to become popular in the 1990s, with pornographers experimenting with new perspectives. The films are scripted, but often portray situations as if they’re “real”. Unsurprisingly, this also falls in line with the rise of reality television. Some gonzo porn, for example, features a group of “average guys” as they flirt with women on the street or in night clubs, one of them filming their attempts. Naturally, they always seem to get lucky and wind up recording the acts. The one holding the camera won’t always get involved in the scene, often just giving a viewer’s perspective as if those watching the video are traveling with these lucky guys.