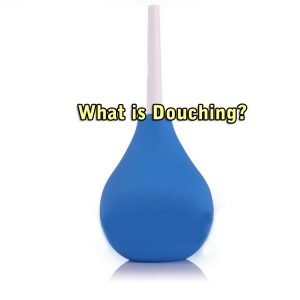 It should be noted that while similar in practice, the word ‘douche’ typically refers to the cleaning of the vagina, whereas ‘enema’ refers to the cleaning of the anus. The word is actually best used to describe a device that is used to assist in vaginal cleaning, as opposed to the actual activity itself. A douche is somewhat similar in function and visual appearance to a watering can. It has a long nozzle attached to a squeezable bulb syringe, typically made out of silicone, that pushes water through the nozzle as it is compressed. Other types of douches exist, but this is the most common in style and appearance.

Vaginal douching is typically undertaken using just water, although a mixture of water with vinegar, or other antiseptic liquids, may be used by some. It is best to use as fewer chemicals as possible when cleaning the vagina, as it has quite a complex ecosystem that is finely balanced by itself. It is also important to understand that douching too regularly can be dangerous and lead to issues such as cervical cancer, endometritis and an increased risk to STIs. While there is no real safe way to engage in douching without the advice of a medical professional safely, minimizing the number of times you douche and limiting your exposure to just water is typically considered to be the two key things of consideration.

Some individuals may undertake douching as a method of trying to avoid becoming pregnant, although it is considered to be a highly ineffective form of contraception when compared to usage of condoms. For this reason, it is not advisable to douche after sexual intercourse in the hope that it will function as birth control. Scientific evidence also suggests that there are no real benefits to douching, as the management of vaginal health is somewhat autonomous and prone to becoming unbalanced with prolonged douching. In fact, douching has been linked to reduced fertility rates, as well as complications during pregnancy and lower birth weights. Medical professionals will almost always recommend that individuals do not douche or if they do, limit the length and number of douches they undertake.

While anal douching has some drawbacks, its benefits and lack of serious medical side effects makes it much more likely to be supported by medical professionals than vaginal douching. It is our opinion that if you do douche, follow guidelines set out to ensure it is as least damaging as possible and ultimately, try to avoid it if you can. The vagina is able to manage itself in almost all situations and should you have an issue with odor or an unpleasant feeling in your vagina, visiting a doctor is certainly the best thing you can do. It is a reality that vaginas are somewhat ‘unclean’ and cleaning them can feel good, but the benefits do not outweigh the risks and for that reason, we strongly recommend you do not vaginally douche.